Voted Best Female Character Design of Winter 2018!
This page is going under a reboot!

The owner of 8-Ball the Cat is currently rebooting this page. As such, some sections may change drastically. 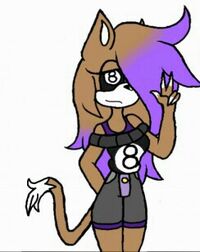 This section is currently being rewritten.

8-Ball is a fairly calm and relaxed person who favors pacifism over violence. She is usually perceived as bored or drugged by how calm she can be in a situation. Underneath her calm nature, 8-Ball can be very anxious at times and would rather avoid conflicts all together. Most of the time, she has a hard time being in crowds due to the anxiety it causes her.

She can activate this ability by first touching a target and then making eye contact with them. Once these conditions have been met, 8-Ball gains the ability to see the entirety of the target's future, second by second, for 20 minutes. She sees the future like frames of a film, and can only see the target from a third-person perspective and sometimes their surroundings. 8-Ball can only activate this ability once per 24 hours and has been shown that the future she sees is 100% accurate. Only case it hasn't been accurate is where universe/time warping abilities have come into play, which they never have.

Probability Manipulation: This ability lets her alter the possibility of events occurring whether they are bad or good. To activate this, she must put her hands in the shape of a triangle and then concentrate on what probability she wants to manipulate. Then it just kinda happens. Sometimes if she does not concentrate hard enough, the probability will be output differently; most cases this faulty wouldn't be in her favor or give her some defect version of what she wanted. She only can use this ability about 8 times in a day. Each manipulation being able to reach a new manipulation tier than the last. She has used this to win the lotto once. But this ability is highly watched by Gods, as it can give those who have the ability too much of an advantage in life.

8-Ball has more than above average flexibility and several doubled joints or hypermobile joints. These two go hand-in-hand to help her achieve things that wouldn't seem possible. 8-Ball could fit in the smallest of spaces with barely any discomfort. Her doubled joints consist of fingers, wrists, shoulders, elbows, and ankles.

Due to 8-Ball's hyphema, her eyesight is less than average. Being born with hyphema, she struggled with trying to experience things throughout her early life with glasses. After getting her contacts, things become slightly easier, but her eyesight is still not the best.

Retrieved from "https://sonicfanon.fandom.com/wiki/8-Ball_the_Cat?oldid=1821177"
Community content is available under CC-BY-SA unless otherwise noted.