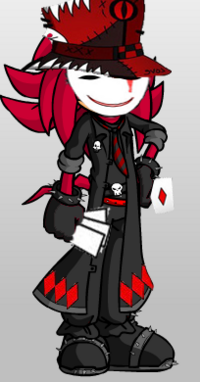 JOKER is an red echidna who hides his face with a mask. The mask is white with a red smile, aswell as thin eyeholes and a red line going through the left eye. He wears a black trenchcoat with a daimond pattern on the fringe, and an entirely black outfit, with spiked gloves. His boots are spiked aswell. He also has a red and black patchwork tophat, with a red eye in the center of it.

JOKER is very enigmatic and eccentric, often talking in puns, or makeing dark morbid jokes. He loves to flirt with girls, and enjoys seeing their reactions. He suffers form MPD, Bi-Polar Dissorder, and several others. He has little to no sanity left, and it is very apparent that he doesnt care.

His past is compleately unknown even to him. He once stated that "Sometimes he remembers it one way, and sometimes another." and that "if he is going to have a past, he preffers it to be multiple choice".

JOKER's special abbilities involve playing cards. He can use his playing cards for verious attacks, and incorperates them into all of his fighting.

He is a skilled marksman, being able to hit almost every target with his playing card shurikens.

JOKER's main weaknes is that he isnt very phisicallhy strong, and most of his powers are shadow related, and can be countered by light powers.

Retrieved from "https://sonicfanon.fandom.com/wiki/%E2%99%A6JOKER%E2%99%A6?oldid=1851516"
Community content is available under CC-BY-SA unless otherwise noted.