Start a Wiki
This is an article about Éloise Dalmung, a character created by Frozen Scorpio on 08/23/2014. 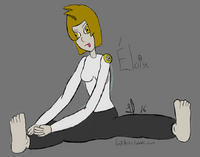 A chef who is normally calm, Éloise can prove to be quite an aggressive enemy if angry or hungry, and also does not take to kindly to negative criticism.

Living a fairly average life in her youth, throughout her whole life Éloise aspired to be a magnificent chef for only the wealthiest and most tasteful people, and had eventually achieved that goal through years of practice and aspirement, serving delicious and exotic foods to royal blood all around. Though as this sense of fame had died out and as simpler foods became much more common and traditional cooking was discarded in favor of this new, easy way, Éloise had begun to slip into obscurity.

She knew already about the Void of Memory and what would happen to her, as she often saw visions of it in her dreams, so she had decided to become a hirable-assassin to remain even vaguely known, and was not jailed for a great amount of time due to her only killing lower-class people. Though as business for that too begun to dry up, Éloise, desperate for money and notoriety, had killed a person of great political-rank (perhaps a Queen or whatnot) and was imprisoned in the Catacombs of that very place, with no way to escape as her hammer was put just far away enough so that she couldn't reach.

As the days slipped past, each one as long as the last, any trace of Éloise's existance had begun to fade away, whether from information on her becoming unavailable or otherwise, and just before she faded into the Void, Éloise had been caught up in the first invasion of the Fasins, having been swallowed by one while incapable of moving due to starvation. That's when she knew her fate was inevitable and succumbed to the Fasin, having created a powerful Fasoldier as a result. Her seemingly endless negativity had provided ample nourishment for the parasite surrounding her body, and remained that way for many months, maybe even years due to the improper flow of time in the Void of Memory.

During a Distortion Storm within the Void, various beams of energy had shot out at random and destroyed many Fasoldiers and heavily damaged Sartorius, along with opening massive holes back into reality. Éloise, with no energy or even awareness of her freedom, had been pulled in by a passerby escaping the void, causing her to be jettisoned thousands of years into the future of her homeworld. In this time, humans are a rarity and the world had been overtaken by these short, animalistic/humanoid beings. Éloise, dazed and confused as well as shocked by this new world she had stepped in, lost it once more, undergoing futureshock but still with little energy or life left in her, leading her to hunt for food, whether it be wild, discarded or even parts of civilization.

From here on, Éloises life had taken somewhat of an ascent in quality. She slowly became known as a sort of Cryptid by the masses, a legend even of a sickly pale vampiress wielding a worn hammer who would consume people in the dead of night. This brought many investigators, police, and curious being for her to consume, becoming more feared by many, eventually attracting the attention of the new head of EQuartz Industries, Jared Infiern. Jared quickly found her location by way of sightings and surveillance footage of her lurking in nearby areas, knitting a pattern of locations where she would strike next and arrive ahead of time. When she eventually got there, Éloise was at first perturbed by how little meat was on his bones and underestimated him, having gone in for a blind, thoughtless charge leading to a (hopeful) quick kill, but was quickly and easily defeated by the violet Crucite. Jared, rather than running or killing her, extended a hand in assistance towards her, promising a better life for her if she simply joined him and began working for EQuartz. Éloise, with no other options, had accepted, and was whisked away to Soulstice City to begin her new life.

Éloises transition to modern life was a slow and painful one for sure, having had a difficult time adapting to her job, the world around her and the people around her. Jared tried to help her in any way possible, whether it be paying off any damages she may have caused or teaching her about the new world as well as re-educating her on common sense and speech. After a few rough years, between which for a few months she was hospitalized after having been injected with a gene common with most beings in the modern time and was heavily monitered by Jared and given only the best conditions for a speedy but thorough recovery, Éloise was a changed woman, now having been mostly integrated with the new world and a functioning member of society, if still a bit violent, but this works well for her position as not only the head chef of EQuartz but also a personal bodyguard of Jared's alongside her own partner, an enthusiastic young girl named Gretchen, and now lives a fairly happy life.

Events of the (subject to namechange) EQuartz Committee

Éloise is usually of few words, choosing not to talk very much for whatever reason. Both when working and when free, Éloise is usually very open, unless the topic is food or her cooking in a negative light, to where she is very close-minded and is quickly angered, but can be easily calmed afterwards. Éloise believes that her cooking is the greatest and will forcefully silence any and all naysayers. Despite her somewhat brash personality, Éloise does still contain quite a bit of humanity within her, as well as loyalty to her friends and fellow workers, as well as slowly-developing compassion and caring for others with the aid of said workers.

Éloise has an average physical build. She is not very thin, yet not too fat either, and noticably round hips. Her arms are somewhat muscular, but simply enough to carry her heavy hammer. Éloise has pale skin, hazel eyes, light-brown hair, and is normally wearing a white business suit with several faded blood-stains and black shoes, though will on occasionally wears a grayish white long-sleeve shirt and black pants.

Having a lot of free time to work with, Éloise had spent much of it training herself to have more physical strength. Along with that, she had become much faster and more resistant to damage. Her weapon of choice is a large steel hammer which she uses to impale her opponents at high speeds from sheer strength alone. Her helmet is solid to the point of bullet-resistance, and even provides insulation for her head to protects against the elements. Too bad the rest of her body is constantly exposed. Éloise is also an expert at timing, even with the smallest of projectiles, most of which she knocks back almost instinctively.

Éloise Grump (Made as more of a doodle than anything)

Éloise casual 2016
Add a photo to this gallery

Retrieved from "https://sonicfanon.fandom.com/wiki/%C3%89loise_Dalmung?oldid=1667976"
Community content is available under CC-BY-SA unless otherwise noted.