Do you think death existed from the beginning ?...No it didn't. That existed after true life was made... but to create a god such as death. It takes time... And what existed to replace death when it didn't exist ? It was the most wrong thing all gods created. The doombringer , The horrifying power able to kill immortals and invincibles...

Kenas's doombringer form is a form he attained with his desire for vengeance and justice in his first fight with kraze. The doombringer is a energy which lurks inside kenas passed down from different people onto different people and finally kenas. It is a form awakened by desire and run by persistent-ness and desire while causing the user pain while in use. 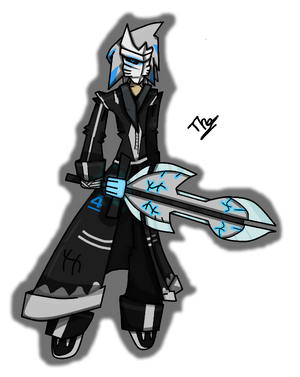 In his doombringer form Kenas looks different from his normal form which is very messy and untidy . In this form he looks very clean and intimidating. He growsto about a tall human's size and under his mask he appears to be human as well , This is possibly an effect that happens to all doombringers no matter what their species due to the original doombringer being a human.

He is shown to be silver haired along with blue highlights. His skin is peach as usual. Kenas's right eye turns into Negative's eye (It turns yellow with a black pupil). His left eye stays the same color and also gains a jet black pupil. He doesn't seem to have a very good build or a very bad build either and has a normal build, but he mostly looks skinny.

He wears a Black trench cloak with silver trimmings and markings. The chest is also colored silver in a diamond shape. The trench cloak is buttoned until the waist and left untouched down from the waist . He wears Black pants and black shoes with silver trimmings , They seem to have the same modification as his normal shoes . He also wears a mask in coverings his whole face in this form but he does not wear it all the time and removes it out of battle (this form stays out of battle because kenas can't purposely de-power it). He also has two chained-gunblades hanging from his waist

Not much changes between in his personality, except he becomes more serious, quick thinking and silent. The silent part can become the total opposite at times.

The creation started when i started giving kenas the Darkspine from sonic and the secret rings . I Gave him about 9 states of Darkspine but realized its overpowered and too much and then the Doombinger slowly came into being. The Doombringer originally was supposed to look more like a hell spawn but i got inspired from a fictional character known as 'Izanagi' and decided to change it a bit. While it does bear resemblance to his original Doombringer it bears more resemblance to the character Izanagi now.

The Doombringer was originally made by the creators to govern over death until a true god came into being. The Doombringers were bestowed upon the power to kill immortals and immortal life until a true Death god came and after The Gods of Death came into being the doombringer's use were no longer needed and their immortality was taken away. Their powers to kill immortals were sealed, but it was not completely sealed due to creators thinking that it would be useful for them.

The first Doombringer was a silent, emotionless and a honest person who executed his job perfectly. But as time passed the Doombringer lost its name. after the death of the 1st and the possessors of the power slowly started being evil and thus the Doombringer's name was tainted simply as a form used by killers.

After decades of foolish and evil intended Doombringers kenas was the person chosen to be the Doombringers .This was one of the reasons why kraze tried to persuade kenas into his side and later attempted to kill him after his betrayal.

The Doombringer was first unleashed by kenas in his first battle against kraze. It was a imperfect doombringer and concentrated only on massive offensive power. Slowly as kenas started to grow up understand more and deepen his bond with Negative it became different and now stands as a very powerful form used by Kenas.

The Doombringer form differentiates from person to person according to their creativity and how they use it.  NOTE: In all 3 states kenas's power is supressed and his aura is reduced to nothingness to fool enemies . This is done by his mask.

'Shi no Buredo jitai' is a improved version of 'Shi no buredo', Kenas's gunblades. This version is plenty more powerful than his normal version and differs in appearance. The guns also gains new abilities. By default the gun fires 'weak piercing shots' that only pass through weak barriers. The gun shots also harm people who cannot normally be harmed ( Invincibles and Immortals ) as that is the doombringer's Original purpose.

The original set of powers do not change but the two gunblades gain new powers the original attacks also grow slightly powerful.

Kenas has all his weaknesses as before but his phobias are gone in this form.

Retrieved from "https://sonicfanon.fandom.com/wiki/%22_Kenas_%22_Dracius_Cross/Doombringer_Form?oldid=1682475"
Community content is available under CC-BY-SA unless otherwise noted.