Ask question about this guy, my favorite OC, nammed Sunset black the Hedgehog !!! 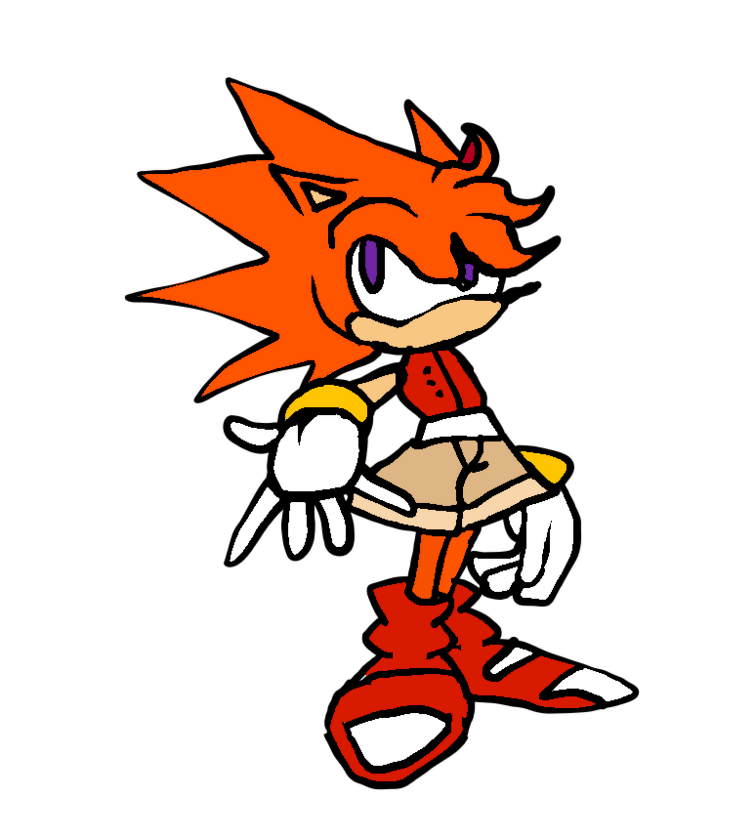 (I have a lot of draw about him, but here is a draw by Sonicdashplayzesecond )(yes, that his/her user name))

Ocs are allowed and encouaged

Music is allowed but no curse words

Eggman stole the choas emeralds, and made a blast that scattered everybody around the planet. They need to reunite and stop eggman. Can they do it?

You can only have 3 characters, choose a character out of this list.

If there's a character you want in I didn't list, ask me.

Story: The group is scattered around the planet: Can they find each other?

You can control up to 2 characters- I'll choose Shadow and Sonic.

(No OC's) Story: During a major war with eggman, he kidnaps and mind controll's everybody, aside from Sonic. After that, a glitch in time and space warps in 3 humans, former freinds, each taking sides:

Chris, who kidnapped a lot of wisps and can preform a magic type of thing with them, on eggman's side. Age 14

Kenny, A former DJ turned Botanist, on Sonic's Side. Age 13.

Katie, The deadly six's side. Good at archery.

(If this is too much storyline I understand, I just like things with storylines.)

Three characters each, Im Tails, Eggman and Kenny. (In case we need to use them, I'll controll the character's nobody's using.)

No OC's, pick a character though.

Story: An explosion from eggman seperated the group, can they find each other? (You can pick 2 characters or less. Im tails and shadow. no OC's)

(Untill we get a 2 other people I'll controll everybody who's not already being controlled.)

Guess how this one will end out?

Rules: A lot of stuff is allowed (If your OC is too over powered, or your OC is weak, thats ok! Thats why I made it that way nobody can die here!)

If you escape the IKEA, you'll pop it into another store then will end up back in the IKEA

you can summon anything and all of the stores will be still normal.

(edited by Nitrogen218)
Anyone want to join in a talkplay with me? It can be about anything.
(edited by Reens the Hedgehog)

(I've just got onto this wiki with no idea what to do and I'm already making a roleplay/talkplay thingy...WOW.)

"It was years since the events made by Infinite and the Phantom Ruby, and everything was back to normal...but, even though the Phantom Ruby is gone, evil still lurks in the shadows, waiting to be free'd from their cages...And that is where the DARK EMERALD comes in. The Dark Emerald is a dark mineral made by the ancients to inprison a dark being, it was then kept far deep into the underground, never to be seen again...UNTIL..."

Zator the Unknown: Me

Shadron the Shadow: Me

No matter where you are in this world, evil will never be far away. It exists because we allow it to. We live out our lives, blissfully ignoring what we should be responsible for until it appears right before us, and then leave the selfless few to take care of it...that is the flaw of society.

These thoughts simmered in Sanzu the Crow's head as he found himself suddenly part of a hostage situation at a bank in Central City. Two heavily-armed Mobians, a squirrel and bear, pointed their weapons at both the front clerk and everyone inside. They were making some sort of demand, but Sanzu hadn't heard them. He was far too engrossed in his thoughts to be paying attention to these small-time crooks.

Someone should put a stop to this. Ah...it can't be me. I'm not worthy enough to even attempt to rescue these people. With how weak I am, I'd probably just get someone hurt-

Sanzu's inner-monologuing was interrupted by a sharp pain in his cheek. He looked ahead and found himself staring at the barrel of a gun.

"You not heard what I said!? You got a death wish, feathers?" the squirrel growled at him.

Sanzu glanced around and noticed that everyone else was on their knees with their hands on their heads. He quickly deduced that the "demands" that the two criminals had been making was for everyone to get on the ground and surrender. He should probably do the same.

"Sorry about that. I didn't mean to inconvenience you. I'm sure you're a very busy person with more important things to do than wasting your time with someone as troublesome as me."

Rather than comforting the life-life thug, however, his words seemed to have the opposite effect.

"Wha- Are you making fun of me!?" the squirrel's face contorted with anger, a large vein bulging on his tiny forehead, "talking back to me like that is the last mistake you'll ever make!"

Had he talked to the squirrel strangely? Sanzu hadn't noticed anything wrong with the way he spoke, but apparently something he said set off the short-fused rodent.

The bear joined his partner, and now Sanzu had two guns pointed at his face. The way things looked, the crow was going to die right here. The very thought of dying...holes in his face...bleeding all over the bank floor in front of all of these bystanders...at the hands of these nobodies...it consumed him.

If only, he thought, if only I could survive this...the memory of this encounter would surely be powerful enough...but I guess it wasn't meant to be. A death like this is perfectly fitting for someone like me.

A short roleplay between time travelers (and these dorks).

A witness manages to escape The Nazar's grasp after one of their missions. Though they have nothing to worry about legally, they still wish to maintain their "clean" appearance to the outside world, and as such, needs to dispose of the bystander. Now a target, the witness seeks the assistance of The Codex, creating even more conflict between the two groups.

(Right so this section will focus on Taura's venture to the desert regions of Kardon in search of something that may help her survive better. For reference, visit these pages; Main page, Chapter 1, Chapter 2: Behemoth of Stones/Chapter 2: Forbidden Lands, Chapter 3: Bloodlines. With out further a-do, enjoy this section of Chapter 3.)

(edited by Minato Arisato00)
Island of Kardon: The Great Desire

(Right you already know how this goes. Main page, Chapter 1, Chapter 2: Behemoth of Stones/Chapter 2: Forbidden Lands, Chapter 3: Forsaken Path. With out further-a-do, enjoy this chapter as the story unveils further.)

Sun sets as Hiero and friends travel back to the beach. Darkness seeps in and the island is enveloped by nightfall upon their arrival at the beach. The glowing gold aura that surrounds Hiero, Ian, and Frost began to make itself more apparent with the lack of light.

Hiero looks around the coastline. He notices Numen is still laid out on the ground, Taura and Phantom can be seen at a distance. The flame made by Numen when the heroes were given their briefing was still active, although very weak at this point.

Hiero walks over to Phantom and Taura. "Well, I'm not dead. Neither are those two." He points back to Frost and Ian. "I was never wrong, there was no doubt in our success. Where's your end of the bargain?"

As Hiero comes into close proximity of the girls the gold aura spreads to them as well, giving them both a rush of energy and a matching golden aura.

(edited by Minato Arisato00)
Hiero the HawkFrost the WolfIsland of Kardon: The Great Desire
Guidelines