(Before we begin, I know that I have an article and a blog about this already. But when I first started out, I had it posted on a forum. I feel more comfortable posting about it where I feel it belongs. It also makes it far easier for me to post updates.) 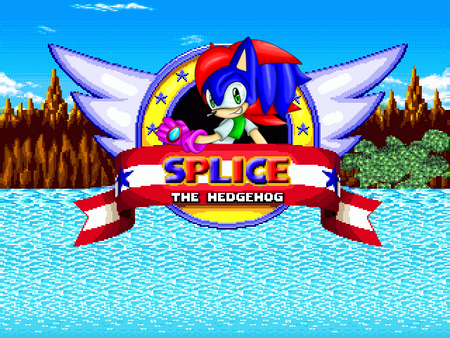 Splice The Hedgehog is the name of the fangame starring the titular fancharacter: "Splice The Hedgehog". The game is currently in production. Both users 'Smash The Echidna' and Kapus are working on it at the same time. Many other people have contributed to the project, which made this game possible. The game's engine is the RPGMaker 2003, which runs very similar to the older Final Fantasy games. The game also features a synthesis system, a character interactive party switcher, Jumping and Ring collecting, many familiar zones, skit scenes identical to that of the Tales Of series, and even Special Stages to collect the 7 Chaos Emeralds as a side quest.

The game, Splice The Hedgehog, is the last episode (Episode 54) of the second season in Smash and Co.'s Roleplay Series, being the season finale.

Splice is an orphan living alone in an old house. He has been living in Greenflower City for as long as he can remember.
One morning, Splice wakes up a few moments too early to the sound of his phone ringing. Upon answering it he recieves an ominous message. "Agent Nero! Abort Mission, return to base immediately!" Splice was left confused and unsettled. After looking up the phone number, he traces the call back to a shady orphanage. While investigating, the city is attacked by the notorious Dr. Robotnik. As usual, Sonic comes to the rescue and chases him away. Splice decides to join him to fight Robotnik, as he is plotting to conquer the world with another brilliant scheme, and even rebuilt his long lost creation: The Egg Carrier. All the while, Splice tries to take whatever chances he can get to investigate his own situation further, and eventually finds out that his long lost father is somehow connected to it, making the mystery even deeper and even more dangerous than he anticipated.

Daz The Hedgehog/SuperSonicRemix: Made several remixes for the game.

Flame-Eliwood: In charge of the Skit drawings.

BruH ThERE iS thIS THinG cALLeD COdinG

i CoDE In ViSUaL BaSIC beCAUse I aM a BASiC BiTCH

Your game actually uses Ruby, correct? My bot was coded in Ruby.

Smash The Echidna wrote: My game uses the RPGMaker 2003. That's all I can tell you.

Pretty sure that's Ruby, who makes the scripts?

(edited by Emerl.exe)
0
Smash The Echidna wrote:
My game uses the RPGMaker 2003. That's all I can tell you.

2k3 was before they added the option of writing your own scripts. Here all you have to rely on are the things provided for you: Events and Common Events.

While I already mentioned some of this in the public discord, a formal update would be nice every now and then.

Here is a short demonstration of how the ice physics work, and one of Splice's passive abilities is. All things considered it's pretty self-explanatory. It was simple to make, too.

This right here is a side project I've been working on for a while.

Overhauling GFC. While the main area is being refurbished with a massively updated tileset, the rest of the city is going to get a whole new layout entirely. I'm aiming to make the place a bit smaller and easier to navigate; especially considering one of GFC's main criticisms were how large it is. As it stands now it's just a huge area with a bunch of smaller maps next to the main large ones. Each area has a wide variety of quality too, as I kept adding more and more to the city as I went along. I still haven't even added everything I wanted!

Naturally, this also means I'll be completely redoing the whole Attack on GFC sequence; which is good because it's a terribly broken mess patched up with duct tape, and I had some neat ideas that never got a chance to be implemented.

Skits are progressing smoothly! Showing off even more new art by Flame-Eliwood.

After obtaining the Leader Flag, you gain the ability to swap party members. At Splice's house or at inns/hotels, you'll find the Leader Flag to activate it.

While the existence of an interactive party switcher is old news, the Leader Flag itself is fairly new. The blue flag activates such, and you get the chance to talk to your friends. Some have interesting things to say, some give hints or remind you of your current quest. Some have unique dialog depending on who you're playing as!

The red flag however, is found in various different places. They're most commonly beside save points, and the beginnings of zones and dungeons. These open up a menu screen to quickly scroll through each character, with a brief summary of their abilities.

That's all for today's updates!